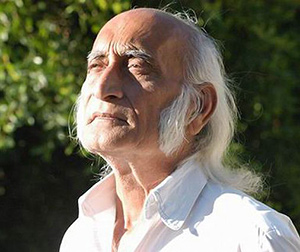 Hira Ratan Manek, short HRM, was born on September 12, 1937 in Bodhavad, India, he grew up in Calicut, Kerala, India, where he studied mechanical engineering at the University of Kerala. After graduation, he joined  the family business a forwarding agency and spice trade, and worked there until he retired in 1992.

In the aftermath he began to study and explore the ancient technique of Sungazing that had fascinated him since childhood. This method was an ancient and forgotten method practiced in many different places around the world, at different ages and cultures.

After working on this method for three years, he was able to rediscover the secrets of Sungazing. During his studies he was mainly inspired by the teachings of Lord Mahavira of Jains, who also practiced this method 2.600 years ago. Other inspirations came from ancient Egypt, Greece and the Native Americans.

Since 18 June 1995 HRM, according to own word, lives exclusively from water and solar energy. For fellowship and social reasons, he occasionally drinks tea, coffee and buttermilk. Up till now he has had three strict periods of fasting, living only on water and sunlight, which were supervised by various scientific and medical teams.

The last of these fasting periods lasted 211 days, from 1995 to 1996 in Calicut, India, under the supervision of Drs. C.K. Ramachandran, a medical expert in allopathy and ayurvedic medicine.

This was followed by a 411-day fast in 2000-2001 in Ahmedabad, India, under the supervision of an international team of 21 physicians and scientists, led by Dr. Sudhir Shah (Read Dr. Shah’s review here in original) and Dr. K. K. Shah, incumbent president of the Indian Medical Association at that time.  The physician  Dr. Maurie D. Pressman describes his experience with HRM in a specially written article and joined a team in a later HRM investigation.

After the last HRM fasting period in Ahmadabad, he was invited to Thomas Jefferson University and the University of Pennsylvania in Philadelphia, where his claims were investigated for 130 days. The team of scientists and physicians wanted to examine his retina, as well as the brain, especially the pineal gland. The team was lead by Dr.Andrew B. Newberg, a leading brain specialist known from the movie “What the Bleep Do We Know”, and Dr. George C. Brenard, a leading pineal gland specialist. First results showed that the cells in HRM’s brain regenerate rather than degenerate. 700 photographs were recorded, which showed the neurons active and not degenerating. Furthermore, the pineal gland showed growth and no shrinkage, as would be typical for a human after the 50’s, while their average size would be 6x6mm. At HRM, it measured 8x11mm, more than 2.4 times bigger. 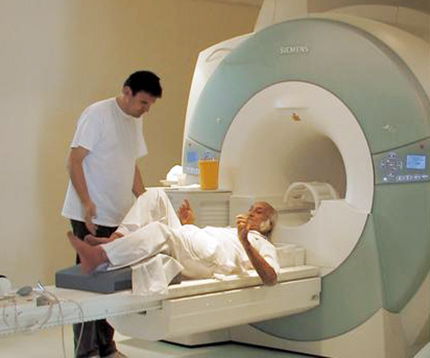 Many other Sungazers achieved similar results and volunteered for investigations; Unfortunately because of economic and other reasons the results were not documented. The uniqueness of HRM is that it has provided his body during his lifetime for studies and experiments on a scientific basis for various periods of time. Although scientists and physicians agree that hunger is reduced, if not even eliminated, because of the complexity of brain functions they have not been able to explain how Sungazing can have such positive effects on the human body and mind. Nevertheless, further investigations will be made.

Since 2002, HRM has been traveling around the world teaching the techniques of Sungazing so that humanity can dissolve its suffering without investment or a guru. In 2009, HRM traveled 80 countries in 210 days, teaching this ancient solar methodology. For the last few years, HRM has been giving around 300 presentations about Sungazing in various languages ​​every year. He gave several interviews in many well-known media around the world, including broadcasters like the BBC. Several documentaries were produced on his method of Sungazing to encourage people to try the practice of Sungazing. In addition, numerous videos can be found on Youtube, as well as many Sungazing websites and blogs in languages ​​like French, English, German, Hindi and many more via search engines. Some chosen ones can be found in our link list, as well as the link list of HRM.

Around the world, “Solar Healing Centers” are being created for a global Sungazing Community. For those who want to find out  more about the sun’s energy as an effective healing source, HRM recommends these books: “Light, Medicine of the Future” by Jacob Lieberman “The Healing Sun: Sunlight and Health in the 21st Century” by Richard Hobday.

Please note that no promises of healing are made here.
All content is for information only and each application is at your own risk.

Since 2010 through Abuna Semai
Who acts behind this page