Observation of the afterglow

The following is part of the Sungazing practice and must not be neglected! The final observation of the afterglow prevents eye problems. These emerge only because of three reasons:

Indeed it is quite simple, and to achieve the full effect that Sungazing promises necessary: After looking into the sun, no matter how long, close the eyes and shade them with your palms. When it’s cooler outside, it can be very soothing and relaxing for the eyes if you rub your palms together until they become very warm, and then put them on your eyes immediately. Either way, in most cases you will now see lights, colors and shapes that are a direct effect of your previous practice with the sun. Observe this so-called “afterglow” or “afterlight” attentively and with a calm mind. It can last for a few moments to a few minutes, usually 5 to 10, but not more than 15 minutes. During this time the lights, colors and shapes will change and disappear more and more. 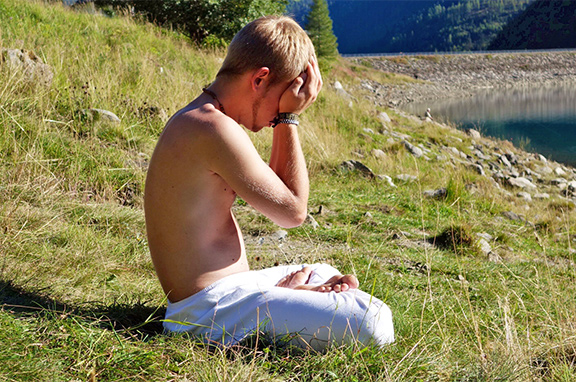 If you close your eyes now – without practicing Sungazing before – you will notice that what you see is not pitch black, but rather dark gray with some very faint lights as well. If you watch the afterglow after looking into the sun, and finally your paled-darkened view looks the same as it did now, then you’ve successfully completed the Sungazing practice for the day. Only then there are no medical problems for the eyes. You will also notice that you will have no stains in the field of vision, as you might know from before, if you have previously looked into a very bright light source.

What causes the afterglow, what the colors mean, when it does not have to be observed, and how all of it affects our lives, will be discussed in detail at the Sunmeditation Workshop and is less important to Sungazing.

What to do if the afterglow lasts unusual long?

A long afterglow can occur when you have overdone it and not listened to the body. Similar as after long sunbath the skin can be reddened with a “sunburn”, as well the retina, which is also a kind of skin, can be affected by too much solar radiation. However, it can also adapt to the higher intensity of the radiation, as well as our skin turns brown with more frequent solar radiation. Nevertheless, you can also “burn up” here, which is noticeable in a long afterglow and in the fact that in everyday life you more often see a spot in the point of the sharpest vision. The experience has shown some helpful advices in this case, and I recommend you do them all right away in the event of an unusually long afterglow:

So far, no Sungazer had to go to the ophthalmologist because of a long afterglow, at least I met no one in all these years around the world. But again: you decide, because you are the only one who has the responsibility for yourself.

Please note that no promises of healing are made here.
All content is for information only and each application is at your own risk.

Since 2010 through Abuna Semai
Who acts behind this page